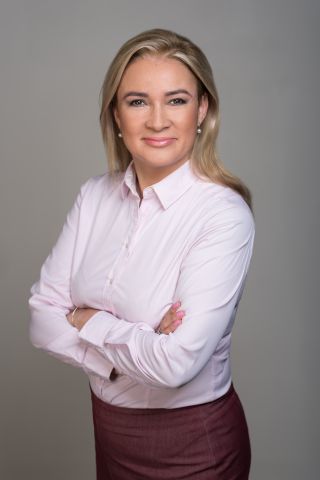 Dr. Izabela Szymajda-Wojciechowska was born on January 1, 1967 in Warsaw.

In 1989 she graduated from the Faculty of Foreign Trade in post-secondary study in Economics and in 1997 she obtained a master degree in law from Faculty of Law and Administration at Warsaw University after defense her thesis in the field of aviation law.

In 2001, she received a doctorate in law at the Institute of International Law at the Faculty of Law and Administration at Warsaw University.

In 2009, she completed Real Estate Brokerage postgraduate studies at Warsaw School of Management.
In 2002-2004, professor of aviation law (international and national) at the National Defense University in the fields of Air Force management, aviation organisations management and air traffic management. Associate of the Centre on Antitrust and Regulatory Studies at Faculty of Management, Warsaw University. In 1990-2003 and 2006-2012 employed at LOT Polish Airlines where she has held a number of managerial positions.

Since 2001 she has participated in the work of the Parliamentary Commission on Aviation Law. Member of the Ministry of Infrastructure law unit and MI unit working on regulations implemented to Aviation Act. She has participated in preparing the LOT Polish Airlines negotiations with the European Community (EC) on the Multilateral Agreement on the establishment of an European Common Aviation Area (ECAA).

In 2003-2006, the Director of the Department of Air Transport Market and Advisor to the CAA President.
In 2007, nominated by the Minister of Sport and Tourism to hold a position of National Coordinator for Aviation during the EURO 2012.
In 2010-2011, the expert of the European Parliament on issues concerning the Air Transport Agreement between United States and the European Community and its Member States.

She is married and has  two children.