Patrick Ky, Executive Director of the European Union Aviation Safety Agency (EASA) – one of the world’s most important organizations responsible for safety in civil aviation visited the Polish Civil Aviation Authority on February 5, 2020. It is the first visit of the EASA Head after Piotr Samson has been elected the Chair of the EASA Management Board.

“Poland plays an important role in the Agency which was proved by the unanimous election of a Pole to the position of the Chair of the EASA Management Board. The purpose of my visit to Poland is to discuss with President Samson the challenges that the civil aviation faces today, such as Brexit, the future of unmanned aviation, growing air traffic and environment protection in aviation”, Mr. Ky said. 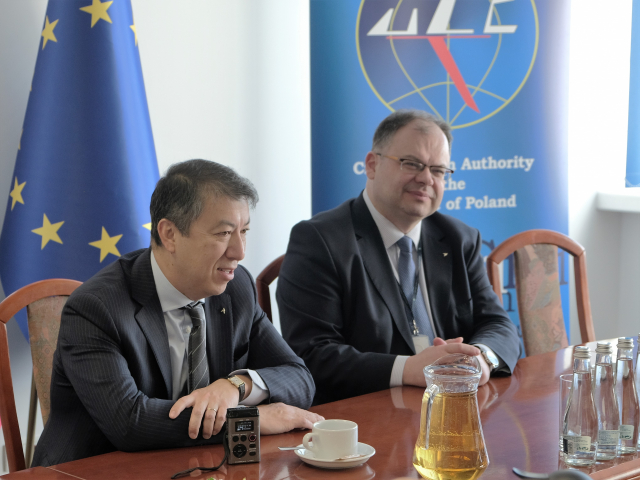 From July 1, 2020 new EU regulations will come into force. They will regulate and unify the rules for the performance of unmanned flight operations. One of the greatest changes will consist in the obligation to register drone operators performing flight operations with drones whose mass exceeds 250 g. The registration can be made electronically and access to the information will be granted to the CAA and the police.

President Samson reminded that in 2013 Poland, as one of the first countries in the world, regulated the market of unmanned aircraft. In 2016 in Warsaw, during an international conference in which the EU Commissioner for Transport participated, the so called “Warsaw Declaration” was adopted. It covered among other things the “U-Space” concept that allows performing drone operations in cities.

“In Poland the drone market is regulated to a huge extent. As for today, the CAA has issued almost 16 thousand qualification certificates for unmanned aircraft operators. Only the USA and Japan have more drone pilots. Due to the knowledge about the branch and the experience we were able to participate actively in the development of the new regulations”, Mr. Samson said.

The predicted quick development of drones is related to another challenge which has to be faced by civil aviation – ecology and reduction of CO2 emissions by aviation. “Problems related to environmental protection in the transportation sector is one of the basic topics discussed by the European Commission. Pressure to limit CO2 emissions is exerted also on civil aviation. And this is an opportunity for electric, i.e. zero-emission passenger drones”, the Head of the CAA said.
The European aviation market develops quickly. New technologies, such as the unmanned aircraft appear. Also the number of airplanes, air traffic and aviation entities grows. It means that both, the CAA and EASA will have new tasks.

EASA oversees safety in Europe, among other things by carrying out detailed audits in national authorities, inclusive of the Polish one. The Head of EASA positively evaluated the results of audits that were carried out in the CAA last year.

The competences of EASA cover the most important areas related to the civil aviation safety – such as: flight operations, drones, aerodromes, air navigation. Its tasks cover among other things:

• proposing implementing rules on aviation safety,
• oversight over and support for member states in areas in which EASA has shared competences,
• cooperation with international entities for the improvement of the global safety level in aviation.

The main EASA organs are the EASA Management Board comprised of 32 members (27 EU states + ESFTA + the European Commission) and the Executive Director of EASA.